Review: Scott Cook - This One's On The House 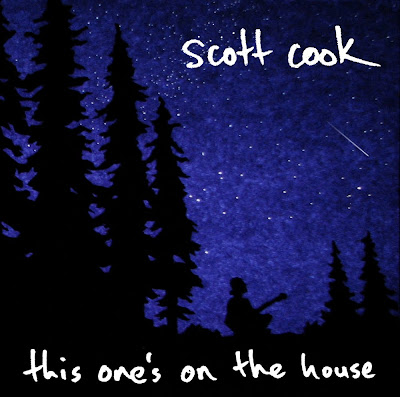 Scott Cook calls the road home, but Edmonton is a home base if anyplace is. Cook left his job as a kindergarten teacher in Taiwan nearly three years ago and has spent the time since on the road playing his music and living out of his van. Cook's debut album, i(2007) made the college radio Top-10 in Canada and has kept Cook in gigs ever since. Cook's latest, i, expands Cook's range to include Country, Soul and Roots music, and muses on his time on the road as well as the human element of love, loss and recovery. The album features contributions from many of the bright lights of the Edmonton music scene and is likely to introduce Cook to a slew of new listeners.

Cook opens This One's On The House with "Carving Stone", a paean to the temporary nature of life on the road, whether it be work, leisure, relationships, or the road itself. The song is presented in the style of a classic country ballad, full of melancholy grace and a gritty world view. The whole thing turns into a wonderful musical parable, as a sort of virtual cycle of life plays itself out throughout the song. "This One's On The House (The Hobo Song)", details the philosophy that goes with living at the leisure of the world around you. Cook shows himself to be a deft poet with an ability to deliver his songs in easy-on-the-ears musical arrangements that owe their lineage to the likes of Johnny Cash, Merle Haggard and Charlie Pride.

Cook's "Ramblin' Kind", which sounds like it should be a Folk/Country classic, is an original tune that at the very least should see Cook covered by artists in both genres. Cook pulls back on the Country influences here for a more straight forward sound, allowing the simple beauty of the song to shine through. "If It Won't Break Your Heart" is part contemplative ballad and part Slow Jam, like Brad Roberts singing Isaac Hayes. It's a rather intriguing tune, defying classification even as it skates familiar fault lines between styles. "Day After Tomorrow" is pure contemplation, rumination on the facts and philosophies of war from the perspective of one thoughtful soldier who has more questions than answers. The song is reflective in its clarity and thoughtful in its beauty. Cook closes with the bluesy "This Old World's Got It's Secrets To Keep", an ode to the constancy of the mysteries of life. Cook expresses the gritty determination and understanding of one who has always lived by the currents of the world ("Don't ask yourself if you want to die on the road. Just ask yourself if this is the world you want to die on"). It's a brilliant close to an album steeped in the wit and wisdom of one who has built his life around the highways and byways of the world.

This One's On The House establishes Scott Cook as one of the better traditional-style Country singer/songwriters working in Nashville or otherwise. Cook still lives the lifestyle of a road-warrior, speaking with a grit and authenticity that is rarely captured anymore, much less lived. Scott Cook doesn't hit on every tune on This One's On The House, but when he does hit it's pure magic.

You can learn more about Scott Cook at http://www.scottcook.net/ or www.myspace.com/grooverevival. You can purchase This One's On The House as either a CD or DVD from CDBaby.com.
Posted by Wildy at 5:30 AM

Well, I do not really imagine this is likely to work.