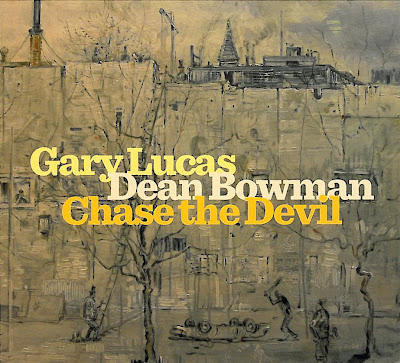 Gary Lucas has a reputation as one of the best guitarists alive, having played/recorded with Captain Beefheart, Jeff Buckley, John Cale, Nick Cave and Lou Reed over the years. His twenty solo albums have marked the development of his singular talent and creativity as a guitarist and composer. Gary Lucas' latest project, recorded with Jazz/Blues vocalist Dean Bowman, is entitled Chase The Devil. Available March 16, 2010, the album explores the roots of Gospel and the Blues, teaming two singular talents on an enthralling musical experience.

Chase The Devil opens with "Nobody's House", with Lucas displaying his highly rhythmic guitar style, and Bowman crooning in his earthy, soulful voice. "Nobody's House" is a song of praise and Thanksgiving offered amid the chaos of the everyday world. "God Is A Good God" is southern gospel at its finest. Bowman's vocal is inspired, and Lucas chips in with the complementary voice of his guitar, driving the background with an intensity that's nearly religious fervor. On "Twelve Gates To The City", Lucas and Bowman almost risk over-doing things a bit; letting stylistic runs in both voice and guitar overcome the essential melody and grace of the song. Both perform technically flawless, but the net effect is just too over-the-top.

"Hinay Ma T'ov" finds Lucas presiding over some delicious slide guitar work even as he adopts the darker tones of the Arabic scale before moving into the Bluesy "Children Of Zion". The developing trend at this point in the album is to offset Lucas' highly intricate guitar work with repetitive sung phrases from Dean Bowman. While the vocal lines are glorious given Bowman's voice, the stark repetition is oppressive. "Out On The Rolling Sea" may provide the most challenging guitar work on the album; a celebration before the solemn praise of "In Christ There Is No East Or West". "Let My People Go" is sung with all the yearning of a people who have suffered across generations, although in this case Lucas' guitar work, while technically proficient, seriously muddies the waters. Chase The Devil closes the Bluesy Gospel ala reverb of "Up Above My Head". The sound is interesting but borders on distraction.

Chase The Devil is a well-intended project that hits its mark in some ways and misses wildly in others. Gary Lucas is an exciting guitarist; highly creative in approach and with a level of technical skill in his instrument that puts him among the best at his craft. Dean Bowman has a voice that could start a revival wherever he sings. Two coming together of two such tremendous talents could be a glorious coalescence or an utter failure. Chase The Devil rides the continuum between the two; never tilting entirely to one pole or the other, but taking in a lot of the scenery in the middle. Neither performance suffers on technical points, but the two talents don't meld well. When they are together it almost feels like happenstance, as they are just as likely to perform on the edge of conflict with one another; like two virtuosos forced to share the same stage. Chase The Devil is good because of the talent level of the performers and the material chosen, but it could have; should have been great.

You can learn more about Gary Lucas and Dean Bowman at www.myspace.com/wechasethedevil. You can catch up with the individual artists at http://www.garylucas.com/ and http://www.deanbowman.net/. Chase The Devil drops on March 16, 2010. You can pre-order the CD from Amazon.com. Expect wide availability for both physical and virtual versions.
Posted by Wildy at 4:55 AM

Gary Lucas and Dean Bowman ...they WERE playing in duo yes; but Dean and Gary do NOT perform anymore together. The CD just come out on Knitting Factory ..still.... Gary Lucas achieved to spoil (it's not the first time he does this) a partnership with Bowman ...
Read more here :
[url]link goes here[/urlhttp://blogs.myspace.com