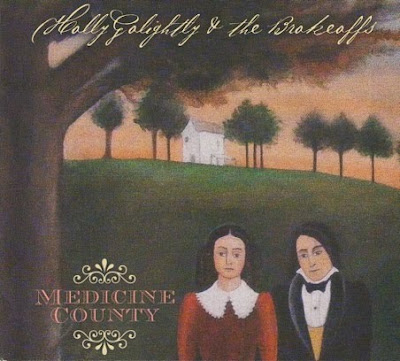 SPIN Magazine termed her the "U.K. garage-rock queen", but Holly Golightly has always had a soft spot for American Roots music. With that in mind, Golightly made herself at home on a farm in Georgia, where she and Lawyer Dave wrote and recorded her latest album, Medicine County. Amidst the twelve tracks are eight originals and four traditional tunes. The music is a far cry from Golightly's days fronting Thee Headcoatees or even her work with The White Stripes and Mudhoney, but the same subversive wit and spirit underlies the tracks on Medicine County.

Medicine County opens with "Forget It", a distinctly surf-noir composition that sounds like something out of a Tarrantino flick. "Two Left Feet" goes for a bit more jangle, bracing the slow-core blues/rocker with plenty of distortion in the guitar part. Golightly And The Brokeoffs get down to business on the title track. "Medicine County" is the tale of looking for some relief in a dry town. Golighty's vocal delivery is believable, singing in the flat affect of someone whose spent life anything but dry. The same delivery carries over to "I Can't Lose". This time it’s much harder to take, as "I Can't Lose" should be a song of happiness. Golightly's morose approach is matched by the lyrical content, where she implies she might tank a relationship that will work just for fun.

"Blood On The Saddle" takes a similar low-key approach, although it works more in this traditional tune of uncertain mourning. The energy is much better on "When He Comes"; a gentle poke alternately at survivalists and folks who spend every moment anticipating the end times. "Escalator" has a country sway to it, but reminds me more of a 1950's pop vocal tune, done here in a sort of garage-country sound. The jaunty melody assures the song will stick in your mind when it’s through. "Escalator" is an amusing tune poking fun at someone who's perhaps never seen an escalator before encountering one for the first time.

"Eyes In The Back Of My Head" continues on the same tongue-in-cheek path, although the vocal energy really comes from Lawyer Dave singing along with Golightly. Her presentation continues to be much less than one might expect throughout the album. "Don't Fail Me" Now plods along in dark timber and aspect. The song seems long at three-and-a-half minutes. Jack O'Diamonds laments money lost at the poker tables; memorializing a love/hate relationship that leads to destitution and an endearing love for the poison that led there. The arrangement is almost Appalachian in style; a pleasant listen.

Holly Golightly and the Brokeoffs take an intriguing spin on the back roads of Americana with Medicine County. The garage feel to the album is enjoyable enough, although the messy feel in the instrumentation is a distraction at times. Golightly has a vocal approach that's difficult to take at times. There's an almost clinically depressed lack of affect to her voice throughout much of Medicine County. While this may be a stylistic choice, it becomes wearing on the listener after a while. The songwriting is decent enough, and there's a definite creative spark here that's a mix of humor, intelligence and pure bravado, but the net effect is mixed.

Thank you for this post, really effective piece of writing.