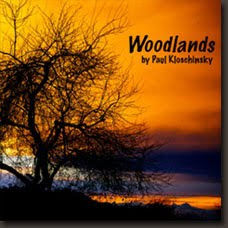 Paul Kloschinsky is a Saskatchewan native with degrees in both Computer Science and Medicine who is also a poet, author and songwriter. He has won awards for both songwriting and photography. In 2009 he released his debut album, Woodlands.

Woodlands sounds at times like two different songwriters were responsible for it. Kloschinsky, at his best, writes in flashes of brilliance. At his least enticing the lyrics sound like clumsy poetry. There doesn't seem to be any real in-between, with Woodlands being feast or famine. Wearin' Blue is the best song on the disc, having won Kloschinsky "Best Canadian Songwriter" honors from MusicAid. It's a story of decay in light of returning to childhood stomping grounds. Some of the decay depicted here is physical but some is also in the mind of the one who remembers everything as bigger, brighter and more wonderful than perhaps it ever was. As good as the song is I had a real hard time with Kloschinsky's voice, which I did not find enjoyable to listen to. All I'm Hopin' For is also a strong track, reminiscing about an old love. The song is subtle and well-written, wondering where she is and if she's still as wonderful as he remembers. Things fall down quickly from here. Kloschinsky makes two brief recoveries. Like Nothin' Before is another song of reminiscence, and Seven Riders is a story song with an urgent feel. The rest of the album wades in mediocre and occasionally awkward poetry married to music that sounds uninspired.

There are all levels of songwriters out there. There are those who couldn't write a dud if they tried, and there are those who struggle with their art all of their lives, occasionally producing a decent tune but never really finding a consistent flow. Kloschinsky seems like he might be from the latter camp. Wearin' Blue is outstanding, and All I'm Hopin' For is very good, but much of the rest of the album is tough to listen to. Vocally, Kloschinsky is a bit tough for me, but there will be those who enjoy his eclectic sound. In the end I would really suggest you stream Woodlands before making a purchase. This might be one of those cases where downloading the tracks you like might be more expedient.

You can learn more about Paul Kloschinsky at http://www.kloschinsky.com/. You can purchase Woodlands through iTunes.
Posted by Wildy at 5:00 AM

Thank you for taking the time to review my CD.