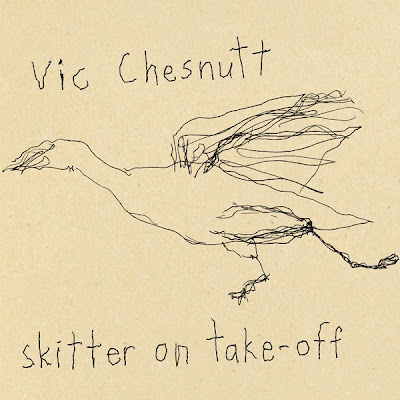 Vic Chesnutt got his big break when Michael Stipe heard him play in the late 1980’s. A singer/songwriter on the Indie Folk scene in Athens, Georgia, Chesnutt has been a paraplegic since an automobile accident many years ago. Stipe produced Chesnutt’s first two albums, but it wasn’t until the release of compilation album Sweet Relief II in 1996 that Chesnutt’s star began to take off. In October, Chesnutt released his latest project, Skitter On Take-Off on Vapor Records. It is a collection of personal and poignant songs written in Chesnutt’s inimitable style.

Skitter On Take-Off is an album for recessionary times, written in stark, simplistic arrangements that highlight his enigmatic voice and post-apocalyptic story telling style. This isn't exactly a party album. Chesnutt opens with Feast In The Time Of Plague, a characterization of those who thrive at the expense of those around them. The song is pained, written, perhaps, from the perspective of one corporate manager speaking to another. One could envision a scenario where both have fallen on hard times, but are looking back at a time when they pillaged the system for all it was worth. Unpacking My Suitcase is a song about how much of a loved one we might bring home from a visit. Chesnutt's gem talks about the smells that came home on his clothes and how he saved them as memories for when he gets home. It's a lonely and somewhat desperate tune that pleads for human contact in terms that are sweet but could border on creepy.

Rips In The Fabric is a soliloquy on the necessity of all that happens to and around us. Chesnutt seems to be saying that whatever is going on in your life is just part of your life; there are no external forces making them happen to you. The song is well written even if makes some interesting conceptual leaps. My New Life is a repetitive keen on loneliness. It's not terribly compelling, but there is a deep anguish that comes across that's not your typical output in a Pop/Folk tune. Dick Cheney is a moral judgment in music on the man that could almost be interpreted as threatening (and certainly might by those who comprise Cheney's protective bubble). Chesnutt closes out with Worst Friend and Sewing Machine, each of which follow a similar minimalist track.

Skitter On Take-Off is an experience. When it works, Chesnutt sounds brilliant. When songs don't work they can be laborious. The sound is what you'd get at a live, in-studio performance. Vic Chesnutt has created a solid album with real strengths.

You can learn more about Vic Chesnutt at http://www.vicchesnutt.com/. You can purchase Skitter On Take-Off as either a CD or Download through Amazon.com.
Posted by Wildy at 5:00 AM

This won't have effect in fact, that's exactly what I believe.