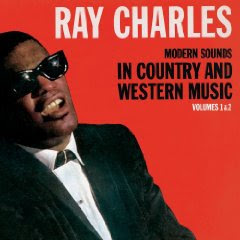 We're only publishing one review because we want you to pay special attention to this one. Regardless of what genre of music piques your interest, there occasionally comes along a recording that crosses so many boundaries, and is so original or unique that it eventually becomes recognized as a master work. These are the sort of albums that can be re-released multiple times across generations (in this case 47 years later), and still have enough commercial oomph to make significant noise on the album charts. In this case, we have an album that not only retains strong commercial punch nearly 50 years later, but was also the beginning of a revolution in music that has helped father (or grandfather) genres such as Americana while foreshadowing the marriage of Country to genres such as Blues, Rock and Pop. Aside from all of that, Ray Charles also spoke of great changes in the midst of the Civil Rights Movement of the 1960's.

On June 2, 2009, Concord Records re-released two of Ray Charles’ classic albums on one CD. Modern Sounds In Country And Western Music Volume 1 & 2. The two albums were recorded in 1962 (February and September, respectively). Volume 1 was released in April of 1962, and is considered by many critics and fans to be Charles’ greatest recorded work. Not only was the album a commercial success (#1 album, 1 #1 single, 2 Gold singles), but it also bent social barriers with the fusion of R&B and Country during the height of the Civil Rights movement. The album also helped Charles to gain wide exposure on R&B, Rock and Country stations, turning the talented performer into a superstar. Volume 2 was rushed to release in October of 1962 based on the success of the first album, featuring 2 top-10 singles and a #1 single (You Are My Sunshine).

Volume 1, in particular, has been lauded by publications after publication as one of the top albums ever created. Blender magazine ranked it #16 on its list of The 100 Greatest American Albums Of All Time. Rolling Stone placed it on the list of its essential Rock Albums in 1997. Stereophile magazine lists Volume 1 on its 40 Essential Albums list, while Time magazine included Volume 1 on its 100 Greatest Albums of All Time. It’s easy to see why. Charles turned his inimitable talents on songs like Bye Bye Love, I Can’t Stop Loving You (#1 single), You Don’t Know Me (Top 10 single) and Hank Williams’ Hey Good Lookin’. With production by Sid Feller (Dean Martin, Peggy Lee, Paul Anka, etc.) and string arrangements by Marty Paich (Sinatra, Streisand, Ella Fitzgerald, Mel Tormé, Aretha Franklin, Michael Jackson, etc.), no stone was left unturned in creating perfect Ray Charles versions of each song.

In response to the tremendous success of Volume 1, Volume 2 was quickly recorded and released in October of 1962, using the same formula that had driven the success of Volume 1. The album included such hits as You Are My Sunshine (#1 single), Take These Chains From My Heart (Top 10 single), and Hank Williams’ Your Cheatin’ Heart (Top 40 single), as well as takes on Don Gibson’s Oh, Lonesome Me and the Chet Artkins/Boudleaux Bryant song Midnight.

Concord Records has done a great job handling these two releases, bringing them together for the first time outside of a box set and in an affordable form. The remaster on both is flawless, and give a great picture of the man, the artist, and the ground-breaking music he was creating at the time. The music is timeless and stands on its own as one of Charles’ greatest legacies, for both its artistic and social impacts. If you want to understand where today’s Americana styles started, with blends of country, rock and blues, look no further than Ray Charles. Without these two albums and the many that followed, the music you’d be hearing today might sound very different. Modern Sounds In Country And Western Music Volume 1 & 2 is a Wildy’s World Certified Desert Island Disc, and practically defines the concept.

You can learn more about Ray Charles at http://www.raycharles.com/. You can purchase Modern Sounds In Country And Western Music Volume 1 & 2 at Amazon.com or download it through iTunes.
Posted by Wildy at 6:09 AM

COWGIRLS AND BOYS CHECK OUT THE SONG SIX PACK AND GET READY TO LAUGH!

I think every person ought to read it.